Continuous Prayer, a call to live the spirit of prayer and to educate it in your students 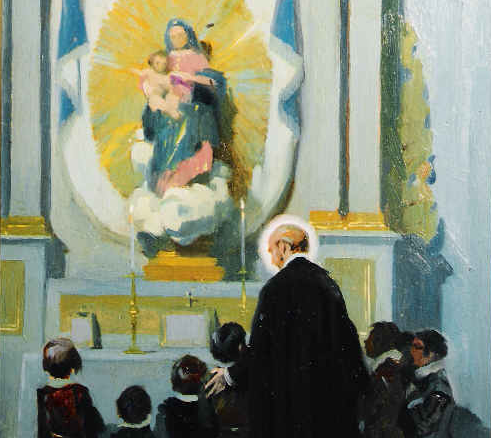 St. Joseph Calasanz, docile to the voice of the Spirit, wanted the spirit and education in prayer to be part of his school, and thus he wrote it down in the first documents of Calasanctian pedagogy: “Every day, from the beginning until dismissal of the class, nine students pray continually, with the assistance of a learned priest, who instructs the students in the manner of prayer, and it lasts half an hour; then another nine students take over. The prayer is for the exaltation of the holy Roman Church, for the extirpation of heresies, for the union of Catholic princes and, in particular, for the benefactors of the college itself. This prayer is attended, in turns, by all the students, from the first to the last class” (Breve Relazione, 1604).

The Pious Schools, born from the prayerful heart of St. Joseph Calasanz, hear the call to live in the spirit of prayer and educate it in their students, while adapting to the culture of the different places and times in which they have developed their mission. Nowadays many Piarist educators, religious and lay, feel called to live in the Calasanctian spirit of prayer, just like the children and together with them, captivated by that word of the Lord: “Let the little children come to me; do not hinder them, for the kingdom of God belongs to such as these” (Mark 10, 15).

As a result of this call, the 47th General Chapter approved the following line of action: “To take care of, deepen, update and spread the Charismatic tradition of Continuous Prayer that Calasanz initiated as a unique Piarist contribution to the new evangelization”. The Father General and his Congregation constituted a work team with the purpose of carrying it out.

With this blog, we intend to accompany all those Piarist educators who have discovered in the prayer of children a way to live the Truth of the Good News of Jesus with the authenticity and simplicity of the little ones.

We begin our journey on the feast of the Immaculate Heart of Mary, which the Father adorned with all the virtues, and in which all his children learn to live and embody them in their own lives. To Her, Mother and Teacher of Jesus and of all her children, we entrust the Continuing Prayer of our children and youth, with the prayer that Our Holy Father wanted to accompany the life of the Pious Schools:

We fly to thy patronage,

despise not our petitions

in all our necessities,

but from all kind of dangers